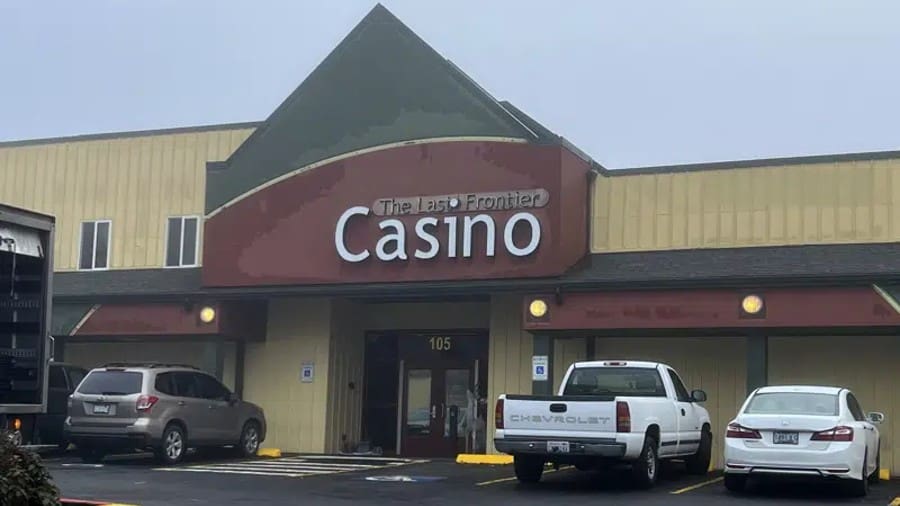 The Last Frontier Casino is seen in La Center, Wash., Tuesday, Dec. 13, 2022. Four people were stabbed or slashed at a casino in Washington state in what witnesses described as a random, unprovoked attack late Monday night, the Clark County Sheriff’s Office said. A suspect in the case was arrested early Tuesday, and all four victims were expected to survive. (Becca Robbins/Vancouver Columbian via AP)

A man at a poker table went on a sudden, unprovoked attack at a casino in Washington state Monday night, stabbing or slashing four people before being arrested after a high-speed car chase, authorities said.

All four victims were expected to survive, according to the Clark County Sheriff’s Office in southwestern Washington.

The attack happened just before midnight at the New Phoenix and Last Frontier casinos, table game and poker establishments that share a building in the town of La Center. Several witnesses called 911 to report the stabbings and said the suspect was armed with what appeared to be a hunting knife.

Patrons and employees confronted the attacker but he was able to make it to a car and fled, the sheriff’s office said.

Deputies found the vehicle and pursued it, the sheriff’s office said, with the chase reaching speeds of more than 100 mph. Police used an “immobilization technique” to stop the vehicle and arrested the driver.

Video from the casino showed a man sitting at a poker table before reaching down, grabbing something and then standing and stabbing the man next to him five times in the head and chest “without provocation or warning,” the sheriff’s office said.

Several people tried to intervene, but the man began swinging the knife at them and then stabbed a woman sitting at the same table, police said. The suspect chased another man into the parking lot and stabbed him when he fell, then drove off.

It was not immediately clear how the fourth victim was wounded. All four were taken to a nearby hospital, and three of them were treated and released.

The Clark County Sheriff’s Office said Scott Harmier, 41, of Vancouver, Washington, is charged with four counts of felony assault. Jail records do not show if he has obtained an attorney. Harmier is scheduled to appear in court Wednesday morning.

In a statement on its Facebook page, the casino called the attack unprovoked and said its human resources department was researching counseling options for staff and guests.

“Our thoughts and prayers are extended for all affected,” it said.

Mass stabbings are less common than mass shootings in the U.S., but they happen. In October, an attacker with a large knife killed two people and wounded six others along the Las Vegas Strip before he was arrested.

The suspect in that case, Yoni Christian Barrios, 32, has been ordered to remain at a state psychiatric facility until doctors determine he can understand the criminal charges against him.