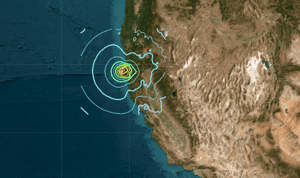 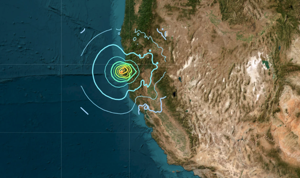 The quake hit at a depth of 10 miles just after 5:30 a.m. ET near Eureka in Humboldt County, the U.S. Geological Survey said. It struck around 7.4 miles west-southwest of Ferndale, the agency said.

More than a dozen smaller earthquakes appeared to hit parts of the region afterward, it said.

At least two people were injured, the Humboldt County Sheriff’s Office said. One person broke their hip and another sustained a head injury, it said.

More than 70,000 utility customers were without power in Humboldt County as of 9 a.m. ET Tuesday, according to the online outage tracker Poweroutage.us.

“Power is out across the county,” Humboldt County’s Office of Emergency Services said in a tweet, adding: “DO NOT CALL 911 UNLESS YOU ARE EXPERIENCING AN IMMEDIATE EMERGENCY.”

The county sheriff’s office said widespread damage to roads and homes had been reported across the county as it warned residents to “be prepared for aftershocks” and to check gas and water lines for damage or leaks.

“Exercise caution if traveling,” it added.

A section of the historic Fernbridge in Ferndale was closed due to “possible seismic damage,” the California Department of Transportation said. In a photo it shared online, cracks could be seen on the bridge.

There was no threat of a tsunami in connection with the earthquake as of early Tuesday, the National Weather Service’s tsunami warning system said.

A number of people said on social media that they were woken up by the MyShake earthquake warning app on their cellphones.

A seismologist with the USGS said people living near the coast reported feeling “significant shaking.” They said people could expect to see minor damage, including things falling off shelves, and could possibly see foundational damages.

The quake comes almost exactly a year after a 6.2-magnitude earthquake struck offshore in the Cape Mendocino area of Northern California on Dec. 21 last year. No major damage or injures were reported in connection with that quake.

That earthquake had struck at a depth of 5.6 miles in the Pacific Ocean, about 24 miles west of the small community of Petrolia along the rocky wilderness of California’s Lost Coast region in Humboldt County, the Geological Survey and the Humboldt County Sheriff’s Department said at the time.