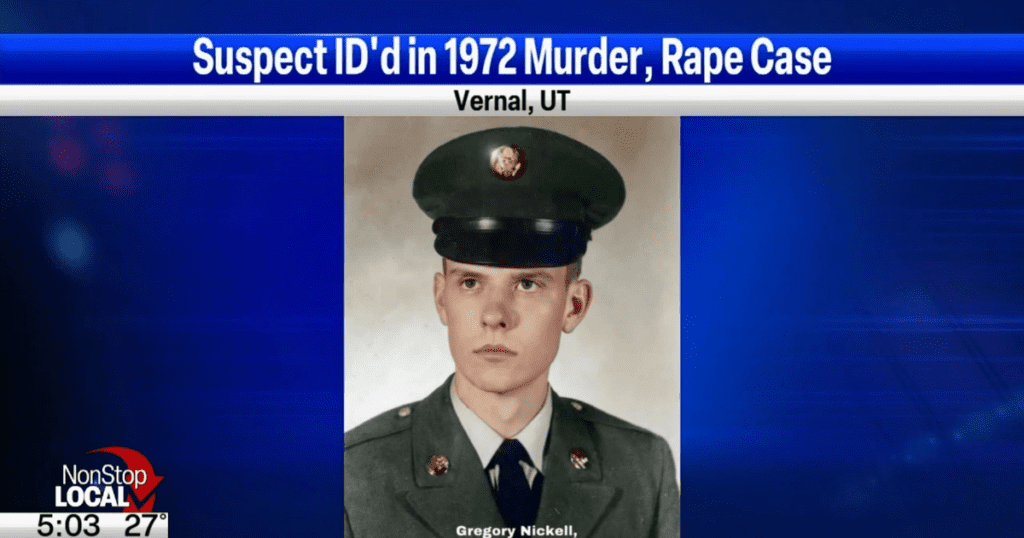 VERNAL, UT — A man who died in Yakima in 2019 has been identified by DNA as one of two suspects in a Utah murder and rape case from Thanksgiving weekend 1972, according to the Uintah County Sheriff’s Office. An army veteran, Gregory Dahl Nickell, was killed near Vernal in 1972 while on a date with a woman, who was then abducted and raped. Two men were reportedly involved in the crime.

Nickell was reportedly at a scenic overlook outside of Vernal with his date when a man knocked on the car window. When the window was rolled down, the man said there had been a crash. He asked 21-year-old Nickell to report the crash, but when Nickell turned around, the man shot him with a .22-caliber pistol, according to UCSO.

The gunman pushed Nickell onto the 18-year-old woman in the passenger seat, according to UCSO. He got in and drove onto US-40, pointing a gun at the woman, according to her police reports. Another car pulled around them during the drive to a remote area nearby. When they arrived, she was put in the backseat of the second car with her head covered. Nickell’s car was set on fire with his body inside.

The men drove around with the 18-year-old for several hours, according to UCSO. Both men raped her once, then left around 60 miles from where she had been taken. She walked to a nearby farmhouse to call police and go to the hospital.

Despite some immediate movement in the investigation, including over 30 pieces of evidence analyzed at the FBI Crime Lab, UCSO says the case eventually went cold. It wasn’t until the forensic evidence gathered from the woman at the hospital could be tested that any suspect was identified.

This evidence was resubmitted for testing in January 2020, according to UCSO. While the DNA profiles that were submitted had not been in any state or national database, investigators would be notified if any future matches were made to the profiles.

Police identified Daniel Arthur Bell as one of the two suspects the following September, according to UCSO. Bell died in Yakima in March 2019 at age 87 and was cremated. The other suspect has not been identified, but testing is in progress. The case is being actively investigated, according to the Uintah County Sheriff, Steve Labrum.

Investigators continued looking into Bell after this profile match. He lived in the area at the time of the crime, working in an area south of Vernal. UCSO reports he was familiar with the area’s backroads. He eventually moved out of Utah, being convicted of rape in Oregon in 1988 before moving to Washington. Family members have submitted DNA samples for further testing, which are consistent with family relationships to the 1972 profile.

UCSO hopes the development could lead to further information that leads to the other suspect. It believes this suspect is several years younger than Bell, who would have been in his late 30s at the time of the crime. Anyone who knew Bell around 1972 is asked to come forward with any possible information, specifically regarding who Bell associated with at that time.

“Greg’s family deserves answers. The woman who was sexually assaulted that night deserves answers,” said Sheriff Labrum. “If you’re the person who can help us give them answers, please come forward now and talk with our investigators.”