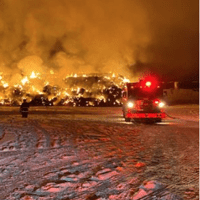 The Ellenburg Racquet and Recreation Center have been serving the community for over 40 years. the fire started at a local hay facility and spread to the center.

The center housed tennis courts, racquetball courts, a batting cage, and an indoor soccer field. Brad case the Ellensburg parks and recreation manager tells me that Ellensburg doesn’t have a lot of indoor recreation space and that during this time of the year is usually very busy.

Case says “Generationally around Ellensburg, we’ve had families that have used that facility for decades. Just today alone I’ve heard lots of heartwarming stories and good memories from people that have grown up using that space. Unfortunately, at times of loss like this, you realize how important things are, and often times you take them for granted until they’re no longer there.”

Case had worked at the Rec center building for almost two years and watched his kids grow up into young adults in front of his eyes there.

Kyndra Smith also grew up in Ellensburg and took gymnastics there when she was younger.

She now has kids of her own and just recently signed them up for indoor soccer and isn’t sure how they will compete.

Smith says ” I think it’s going to have a big impact. Most of the indoor youth sports are held there. I’ve had a son who already did indoor soccer there when he was younger the indoor soccer signups were last month and it’s supposed to start in January or February.

Most of the youth sports compete through the rec center and there is no other space like the Ellensburg Rec Center in the Community.

The Kittitas County Sheriff says the preliminary loss is seven million dollars and they are handling the investigation.