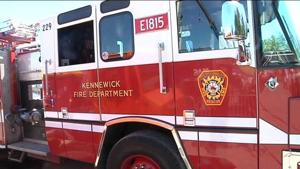 Kennewick firefighters were sent out to the house fire on South Auburn Plaza and arrived within nine minutes of being dispatched to the property.

The fire was put out 20 minutes after crews arrived. The fire was contained in the room where it started and didn’t spread to any other areas of the house.

The Washington State Fire Marshal’s Office offers tips when picking, placing and lighting your tree for a fire-free Christmas.

According to the Kennewick Fire Department, the young man who closed the door of the room on fire before leaving the house helped contain the fire to the room it originated from.

A fire at a Kennewick home was contained to one bedroom when the door was shut.

Josh Fetterolf who was home during the fire says “They got here really fast when I look back at it, and they were amazing.”

Kennewick Fire Chief Chad Michael says their main focus when they go out to fires is trying to preserve people’s property, which includes Christmas presents.

Christmas trees and Holiday decorations can also be fire hazards.

“One of the things that our firefighters noticed was the Christmas tree that was out with presents that were underneath it. So when they saw that, they worked really hard to get the Christmas up and put them on the couch to make sure we helped preserve Christmas for the family,” said Michael.

Chief Michael was able to talk to the family after the fire and says the family was really touched by their thoughtfulness.

A family in Toppenish is dealing with the aftermath of a fire that heavily damaged their house yesterday.

“Thank you so much, you guys are amazing. I’m so thankful for you guys. It was amazing for you guys to do that,” said Fetterolf of the firefighters’ efforts.

Due to smoke and water damage, the family of four will be temporarily displaced.

There were no injuries to the family, but one firefighter had a minor injury but didn’t need any medical attention.

Fire investigators say the cause of the fire was determined to be a young man that was using a lighter to melt spray foam residential insulation.

It was not clear what exactly he was working on when the fire started.

KFD would like to remind everyone to get out and stay safe if they have a fire in their house and recommend developing an escape plan and practicing it.