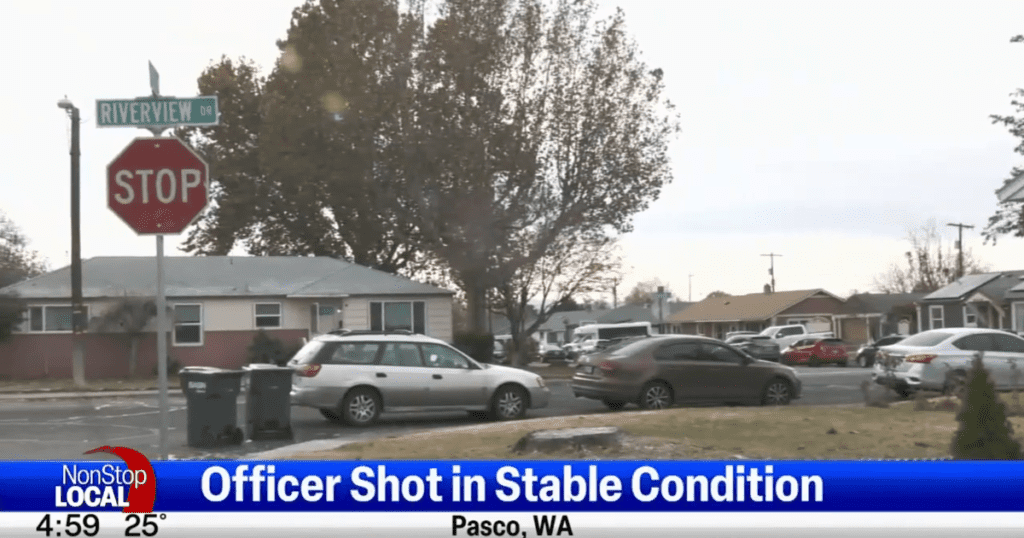 The man suspected of shooting Officer Jeremy Jones during his arrest, 27-year-old Devontea Wright, appeared in court for a bail hearing on December 2.

Wright appeared in Benton County Court regarding the warrant out of Benton County that he was arrested for. Bail was set at $2 million for second-degree assault with a deadly weapon and first-degree unlawful possession of a firearm, according to Benton County Prosecutor Andy Miller.

Any possible charges regarding the shooting of Jones will come out of Franklin County, according to Miller.

The Pasco Police officer shot while making an arrest on December 1 has been released from the hospital, according to an update from the Benton County Sheriff’s Office. Local law enforcement joined in a procession escorting 16-year police veteran Officer Jeremy Jones home with his family.

The officer who was shot, Jeremy Jones, is recovering from the gunshot in the hospital, according to the Pasco Police Department. He’s been with PPD for 16 years and currently works patrol.

The shooting occurred during the arrest of 27-year-old Devontea Wright, who had a nationwide extraditable warrant out for his arrest regarding a shooting in Kennewick, according to Chief Ken Roske. PPD was on scene assisting the U.S. Marshals and several other law enforcement agencies.

Law enforcement approached Wright outside a home on the 1900 block of Riverview Drive at around 1:30 p.m., according to Roske. While arresting him, Officer Jones was shot, according to PPD. Life-saving measures were performed by officers on scene before Jones was taken to the hospital.

Wright has since been booked into the Benton County Jail.

According to court documents Wright previously faced 2nd degree assault with a deadly weapon and 1st degree unlawful possession of a firearm in May of 2022.

The Franklin County Sheriff’s Office is investigating the shooting, according to PPD.

“I’m extremely proud of the conduct of our officers who responded and likely saved our officers life,” said Roske. “I want to thank our regional law enforcement partners and the Pasco Fire Department, who provided resources to this incident.”

A Pasco police officer was shot during an arrest on the afternoon of December 1, according to the Pasco Police Department.

The officer is reportedly in stable condition at the hospital. The suspect is in custody, according to PPD. Not much is known at this time.