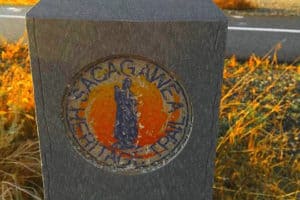 The Sacagawea Heritage Trail winds along the Columbia River shores starting in Pasco WA and meandering to Richland and Kennewick and back again to Pasco. The trail is mostly off public roads and consists of a 23 mile moderately trafficked blacktop along both sides of the river in the Tri-Cities. In addition to cycling on the path, runners will enjoy its scenic views while walkers can take advantage of its paved surfaces. Dogs are welcome as well but must be kept leashed for everyone’s safety.

Three bridges connect the two sides of this trail and all have paths for safe non-motorized travel. The southernmost bridge is the Cable Bridge which takes trail users to the City of Pasco. A short distance to the east of the bridge, at the confluence of the Columbia River and Snake River, is Sacajawea State Park, featuring a museum and host to numerous outdoor activities. To the west of the Cable Bridge, the trail follows the Columbia River for several miles through Pasco to the I-182 Bridge.

Pasco Washington
The Sacagawea Heritage Trail begins at Sacajawea State Park and heads west through the industrial section of Pasco, past the Port of Pasco, and passing under the Cable Blue Bridge. Beyond the Blue Bridge, the trail goes through Wade Park. The lanes are divided allowing for two-way traffic.
When you exit the park, the lane markings end, and the trail climbs up onto the Pasco Levee. At the west end of the levee, the trail passes through Chiawana Park and on to Court Street for a little over a mile before crossing the Interstate 182 Bridge where it crosses the Yakima River.

Richland Washington
The trail ties in with the Riverfront Trail at the base of the bridge and continues west until reaching SR 240 where it turns south and follows the highway until it approaches the Columbia Park Trail Exit. The trail then crosses the Yakima River Delta running through the Riverview Natural Preserve and Yakima Delta Wildlife Nature Area. As the trail approaches Columbia Park Trail it turns east onto a levee until coming to a parking area then passes by Bateman Island and enters Columbia Park at the Kennewick city limit.

Kennewick Washington
The trail runs the length of Columbia Park along the river. At the east end of the park the trail passes under the Blue Bridge and travels along the levee and passes Clover Island before crossing the Cable Bridge and completing the loop. An alternate route goes across the Blue Bridge. Bike lanes on both bridges are safely separated from the highway.

Parking and Trail Access
From I-182 in Richland, exit north onto George Washington Way. After 0.4 mile, exit right onto Columbia Point Drive. Follow the road to its end at the Columbia River, where Columbia Point Marina Park features a large parking lot. Head under the I-182 Bridge to reach the Sacagawea Heritage Trail.

Additional parking can be found at a number of city parks and other trailheads along the trail’s route.