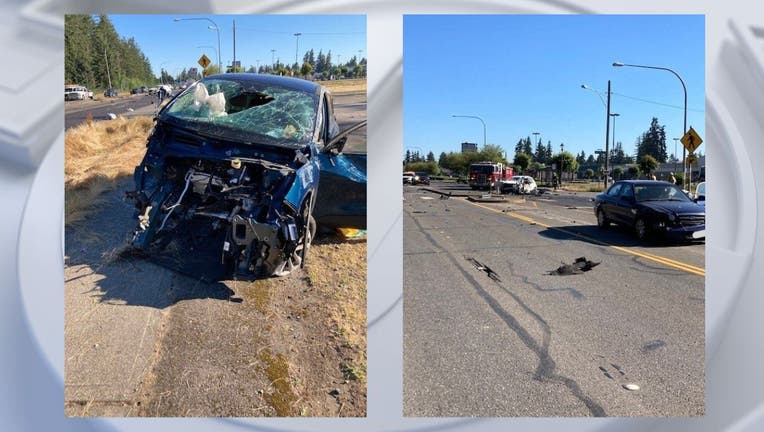 SPANAWAY, Wash. – Another driver was seriously hurt after a passed out couple woke up, rammed a patrol car and caused a four-car crash Tuesday in Spanaway, authorities said.

According to the Pierce County Sheriff’s Department, deputies found a man and a woman passed out in a car around 8:00 a.m. in a Starbucks parking lot on S. 166th St. in Spanaway. The car was on with its hazard lights flashing and the windshield wipers going. Deputies said they saw drug paraphernalia next to woman in the driver’s seat.

Deputies woke up the couple, but said they were uncooperative. The man in the passenger’s seat put the car in reverse and told the woman to take off, they said.

The driver backed into the deputy’s car missing two deputies and a cadet, authorities said, before driving off southbound onto Pacific Ave.

Deputies followed the suspected DUI driver and found that she crashed at Pacific Ave. S. and 180th St. E. The woman was taken into custody by the car. The man fled but was captured by norther person until deputies could take him into custody.

Another driver suffered serious injuries in the four-car crash and was taken to the hospital.

The 24-year-old woman who was driving was taken to the hospital. Once she is released, she will be booked for investigation of Assault in the 1st Degree, Felony Hit and Run, Vehicular Assault, DUI, Eluding a Police Vehicle, Possession of a Stolen Vehicle, Animal Cruelty in the second degree and several other drug related offenses.

The 32-year-oldman who was the passenger was cleared from the hospital and booked into Pierce County Jail for investigation of Assault in the 1st Degree, Felony Hit and Run, Vehicular Assault, Possession of a Stolen Vehicle and Possession of Drug Paraphernalia.

Authorities ran the VIN which did not match the license plates on the vehicle which revealed that it had been stolen from Frederickson in June.

There were also two small dogs in the car. One of them was ejected in the crash and picked up by a witness. The other dog was not found.

READ NEXT: Semi rollover crash on I-405 causing delays near Southcenter

Driver hurt after semi truck rolls over on SR 167

The accident blocked all southbound lanes on SR 167 in Sumner this morning, but the road has since reopened.