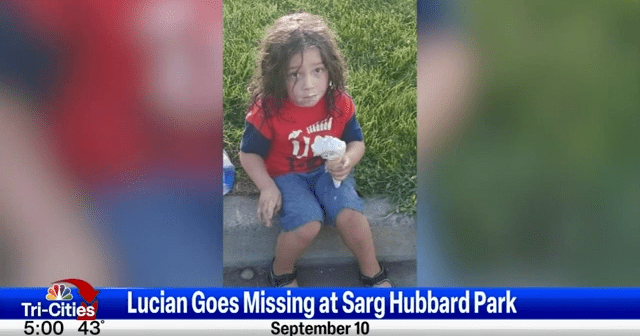 YAKIMA, Wash. – Lucian Munguia was considered missing for 111 days, from his disappearance on September 10, 2022 to remains being found December 30. In that time, the missing boy’s fifth birthday was celebrated. NonStop Local has created a timeline of events in Lucian’s case.

Lucian Munguia is reported missing after disappearing from around the play area at Sarg Hubbard Park at the Yakima Greenway. He had been wearing a blue shirt with a shark on it and blue shorts and was last seen playing with his brother.

The Columbia Basin Dive Rescue returned to continue searching for Lucian. The National Center for Missing and Exploited Children asked for the public’s help finding Lucian and partnered with the Ring Neighbors App to assist.

Lucian’s family started a Facebook page, Finding Lucian, to clear up misinformation and rumors regarding the case.

Tailgaters Bar and Grill, where Lucian’s father works, raised around $8,500 in a bake sale and silent auction to benefit the family and others affected by the disappearance. All employees wore shirts reading “Help Us Find Lucian James.” His parents had not worked since he went missing.

“We got your back; we love you,” said Tailgaters owner Rich Goodall. “Take care of the business that you need to take care of; we’re here and will be here to support you.”

The FBI took over the search for Lucian, while still working with other agencies. Sarg Hubbard Park was completely closed for the entire day in order to allow an FBI search. A dive team from the east coast was brought in to search the pond and lake.

The FBI extended its closure of Sarg Hubbard Park.

Sarg Hubbard Park was reopened to the public.

Lucian’s fifth birthday was celebrated at Sarg Hubbard Park, with approximately a hundred community members in attendance. Attendees prayed for Lucian’s return and placed flowers in the pond, symbolizing Lucian’s love of water and his mother’s love of flowers.

The Yakima Police Department asks the public again for any information on the case. It asked for photos and videos from between 6:45 and 8 p.m. on September 10, even if seemingly not relevant.

The missing boy was featured on an episode of “In Pursuit” with John Walsh. The episode aired on Discovery and streamed on Discovery+.

The National Center for Missing and Exploited Children has released a photo of what Lucian might look like with shorter hair.