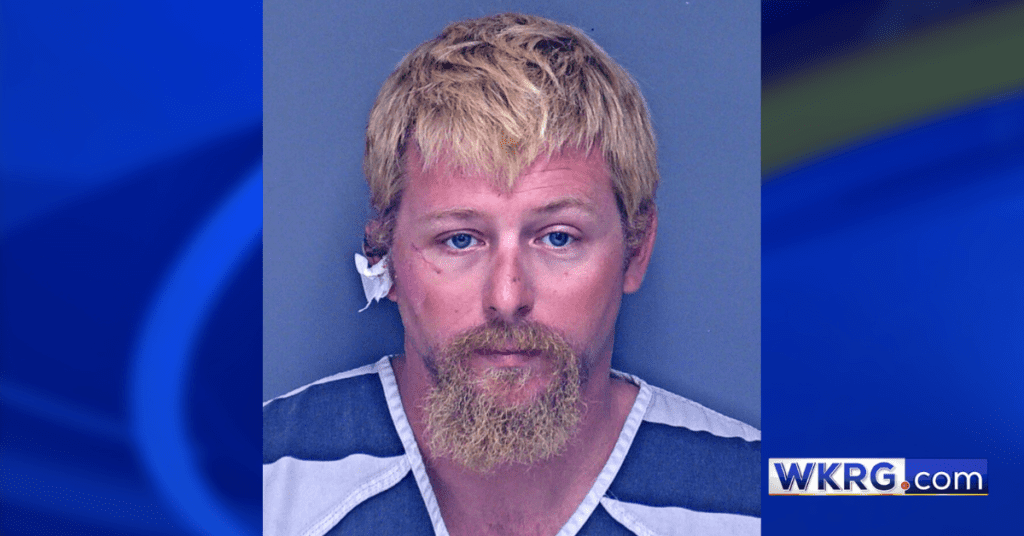 (UPDATE) 5:25 P.M.: Investigators say Tyler Henderson of Orange Beach was speeding and drunk when the 2017 GMC Pickup he was driving slammed into the side of Officer Ivan Lopez’s patrol car almost two weeks ago, killing the officer on impact.

“The truck approached the stop sign at Highway 59 and never slowed down. He crossed four lanes of traffic and made contact with Lopez and caused what can only be described as an explosion,” says Summerdale Police Chief Kevin Brock.

Henderson is now charged with reckless murder in the death of Officer Lopez, assault DUI for the serious injuries to his passenger and driving with a suspended license and a violation of the ignition interlock law.

The arrest comes ten days after the horrific crash leading many to ask why it took so long. “I think it took investigators a little bit of time to figure out what happened because it wasn’t Tyler’s car,” says Beck.

“What might seem to the public as something that should be an open and shut issue, is not,” says ADA Teresa Heinz. “These things take time. It’s not like something you see on television.”

Meanwhile, Lopez’s family and colleagues are grateful the case is moving forward but still mourning the loss of a life that touched so many. “We’re grieving,” says Mt. Vernon Police Chief Duncan Harrington. “We’re going to grieve but we also have 1500 other citizens that we have to take care of but we are going to do our job and we’re going to grieve together.”

After spending time in the ICU of University Hospital, Henderson’s passenger has been released from the hospital.

Henderson is expected in court Friday for a bond hearing.

UPDATE (10:45 a.m.): Tyler Henderson, 31, was arrested and booked into the Baldwin County jail for murder after he caused a wreck that led to the death of Mount Vernon officer Ivan Lopez in Summerdale, according to Summerdale Police.

Summerdale Chief of Police Kevin Brock said the wreck that killed Mt. Vernon police officer Ivan Lopez was so “horrific” that it took responding officers some time before they could tell that one of the vehicles involved was a police cruiser.

“He was a smiling face to the community,” the Mount Vernon police chief said of Lopez. The chief also said the Mount Vernon Police Department was like family and they are grieving the loss of their colleague.

Investigators believe Henderson was heading from Orange Beach to Robertsdale at the time of the wreck and Lopez was on duty and headed to his home in Foley.

The Baldwin County Assistant District Attorney said there was a passenger in the vehicle with Henderson and their office is considering that person a victim. The ADA said she did not know the passenger’s current condition but at one point in the past 10 days, they were in the Intensive Care Unit.

SUMMERDALE, Ala. (WKRG) — Investigators with the Summerdale Police Department announced they will be holding a press conference about the investigation into the death of a Mount Vernon police officer.

The press conference will take place at 10:30 a.m. at the Summerdale Town Hall. WKRG News 5 will be live on our Facebook page and on our website.

On Aug. 22, 2022, Officer Ivan Lopez was killed in a wreck on Highway 59 while he was on his way home to Foley. Investigators said a pickup truck flew through a stop sign and that is when the wreck occurred. Mount Vernon Police Chief, Duncan Herrington, said this is the first officer with the police department who was killed in the line of duty.

Sources close to the investigation said on Aug, 31 that officers are very close to making an arrest in the case.

Stay ahead of the biggest stories, breaking news and weather in Mobile, Pensacola and across the Gulf Coast and Alabama. Download the WKRG News 5 news app and be sure to turn on push alerts.