What will Washington state lawmakers tackle in 2023? A budget, housing, and more

What will Washington state lawmakers tackle in 2023? A budget, housing, and more 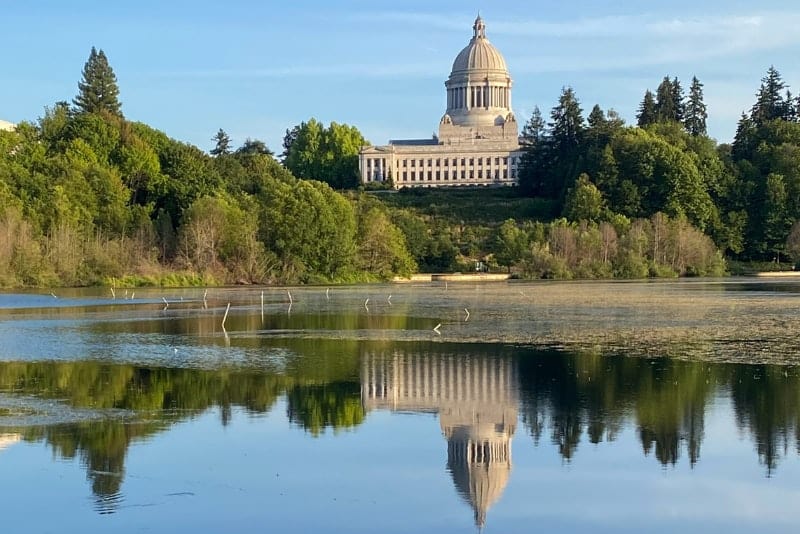 State lawmakers are getting ready for the new legislative session, which begins January 9 — and it’s a big one.

There’s a two-year budget that needs to be hashed out, along with a number of other significant agenda items.

Austin Jenkins is a reporter with Pluribus News and the host of “Inside Olympia” on TVW. He spoke to KUOW’s Angela King about what to expect in 2023.

This interview has been edited for clarity.

Angela King: So, let’s start with Gov. Inslee. He unveiled his budget proposal last week, likely his last one as governor — that’s unless he decides to run for another term. So, what are some of the governor’s top priorities this time around?

Austin Jenkins: I would think of this as a post-pandemic budget proposal where the governor is really focused on shoring up the systems that were strained or even brought to the breaking point during the last three years. So, we’re talking about the health care system, especially hospitals and behavioral health, K-12 education and student learning loss, mental health needs, the state’s fragile childcare system, and, of course, the ongoing housing and homelessness crisis. There’s also money in this budget for pay raises for state employees. This is a big budget — $70 billion over two years, representing a double digit increase over the current budget.

Inside Olympia – A full-hour, in-depth interview with Washington Governor Jay Inslee — looking back at 2022 and ahead to 2023, including his priorities for the annual legislative session which kicks off on January 9.

Well, you mentioned housing. That’s always a big issue but especially now, from the lack of affordable housing to prices being so high for those in the market. What is the governor’s plan when it comes to addressing this issue?

If there’s one proposal in this budget that really stands out, it’s the governor’s call for a $4 billion voter-approved bond measure to exceed the state’s debt limit and pay for an additional nearly 27,000 affordable housing units over the next eight years. This would be on top of the $2.5 billion the legislature included in the current budget to address the state’s homelessness crisis. While 27,000 units sounds like a lot — and it is — there’s a bigger crisis here that you’ve pointed to.

By the governor’s own estimates, the state is going to need one million additional homes by 2044 to meet the growth in population. That includes more than half a million units for low-income and extremely low-income households. I think one of the big fights that’s looming in the legislature is where you build that housing. The governor likes to say it’s not going to be sprawl to the base of Mount Rainier. There’s a lot of focus on building multifamily housing in urban areas and near transit. But that could involve the state bigfooting cities and their zoning laws. The governor did tell me that he will be back this year with a revised version of a bill from last year designed to require more density in cities. We’ll see if that gets more support this time around.

In this one-hour special, you’ll meet members of the Southeast Asian communities in South Park. From there, we’ll follow the ripples of displacement in other cities, and chase the pattern back in history to the Central District and the founding of Seattle. https://t.co/3Mj497Y35a

Well, we’ve got inflation on the rise, local layoffs in the tech industry and talk of a looming recession. Are there any tax relief proposals on the table this time around?

We’re seeing Democratic governors and lawmakers in a lot of state pitch middle-class tax cuts or rebates to help offset rising costs and inflation. Here in Washington, majority Democrats have been very consistent that they want to target tax relief to those who need it most. The governor told me the other day that he doesn’t want to give tax breaks to billionaires, and he said when you give a general tax cut in Washington, because we’re not in an income-tax state, you’re giving tax cuts to billionaires, too.

Instead, the legislature has done things like funding an earned-income tax credit that’s about to kick in and will benefit an estimated 400,000 families. There is some talk of maybe expanding income eligibility for that next year. There’s a Republican proposal to do that, and Speaker of the House Laurie Jinkins told me she’s open to considering that. The legislature also has reduced the B&O [business and operation] tax for small businesses and actually eliminated it in many cases. So, in talking with Democratic leaders, they seem open to continuing to look at targeted tax breaks, but I’m not hearing any appetite for across-the-board tax cuts.

One of the big events that happened this year was the overturning of Roe v. Wade in the Dobbs Supreme Court decision. Abortion rights advocates really turned out for the midterms. What, if anything, are state Democrats proposing to enhance or protect abortion rights here in Washington state?

I would say this is a top priority of the governor and of Democratic lawmakers. The governor is still talking about a constitutional amendment to enshrine abortion rights in the state Constitution. But that’s a heavy lift, and I don’t see evidence at this point that there would be the two-thirds vote it needs. That would require a number of Republicans to join with Democrats.

Short of that, Democrats are looking at passing laws aimed at doing two things: closing what they see as data-privacy gaps that could expose a pregnant person who comes to the state to obtain an abortion, and taking steps to protect both patients and providers from the long arm of the law in other states, essentially trying to ensure that no provider and no patient here is vulnerable to prosecution or other legal action by a state that prohibits abortion. Democrats are calling these sanctuary policies.

Well, speaking of court decisions, the Washington State Supreme Court ruled last year the state’s felony drug possession law is unconstitutional. That’s kind of putting lawmakers in a bit of a pickle. Tell us how.

After this decision came down, the legislature passed a temporary fix, making simple drug possession a misdemeanor, not a felony, and requiring that a person be diverted to treatment before they can be criminally charged. But this law has a sunset provision that kicks in in July. So, there is pressure on lawmakers to come up with a more permanent response this coming session. If they don’t, then after July, drug possession would once again be decriminalized.

I think the last two years have strengthened the resolve of many Democrats that the old approach of treating drug possession like a felony is not the right approach. But I also sense, in talking to the governor and to Democratic leaders, that there’s not a great deal of interest in decriminalizing drug possession. That then leaves them trying to refine and improve the framework they’ve already set up, with a focus on getting people into treatment but having some sort of backstop of penalties.

I think you’re gonna see some pushback from Republicans on this. They’re not necessarily opposed to treatment, but they will want a real carrot-and-stick approach, so that if someone doesn’t get treatment, there are firm consequences. One of the challenges here, though, is that the state doesn’t have enough treatment capacity — and building that capacity isn’t going to happen quickly.

Well, you just mentioned Republican pushback. I’m sure there’s going to be some pushback on the next topic we’re gonna get into. Democratic leaders are hoping to pass a ban on assault weapons, a proposal that has failed in years past. Walk us through this one.

The idea of a ban on so-called assault weapons does seem to be gaining traction. President Biden is pushing for a national ban. The Illinois legislature is currently debating the idea. It’s not a new idea here, as you’ve noted.

What I would say is significant is not that the governor and the attorney general are talking about this, which they are; it’s that the leading gun safety group in the state, the Alliance for Gun Responsibility, has now made this its top agenda item for the 2023 session. This is a group that has been very strategic and methodical about pushing gun legislation in the Washington legislature. Up until now, they have not made an assault weapons ban a priority. Instead, the group has focused on things like limiting magazine capacity and red flag laws. That tells me that they think the time is right, and they might have the votes in this incoming legislature to do this.

Another proposal from the Alliance that the governor has gotten behind is requiring a permit to purchase a firearm. These are big changes. They will, as you say, face huge opposition from gun rights advocates and from Republicans. If they were to pass, they’d likely face legal challenges. But if there was a year to watch for something like a ban on so-called assault weapons, I’d say 2023 is the year to be watching in Washington state.

It’s the tenth anniversary of the vote to legalize recreational cannabis in WA. Sales and tax receipts are robust. But researchers are concerned about high-THC product trends. https://t.co/YDpwXY1Nb0

Alright, well, we’ll definitely be keeping tabs on that topic. There’s just so much that legislators are going to have to weed through this session. What do you think they’ll have bandwidth to take a look at — on top of everything we’ve just talked about?

I expect that you will see a continued debate around police reform. I would note that the state’s legal cannabis system is 10 years old this year, and there are challenges that it faces to be successful in the next decade — concerns around equity and who gets licenses, concerns about high-potency products that are hitting the market, and then the role of the illegal market. So, that may get attention in 2023. There will also be a focus on the state’s new cap-and-invest program, the Climate Commitment Act, both how to spend the money that is going to begin to be generated from that and fine-tuning that new program. And I’ll leave you with education. That’s half the budget, or thereabouts. There is an acknowledgment that there are ongoing deficiencies, especially in the state’s special education program.